Last season: The Pacers jetted to a 33-7 start, the NBA’s best record. They looked every bit a championship contender, and some went as far to label them favorite.

And then they collapsed.

What happened? You name it. Infighting, finger-pointing and the loss of a mental edge.

Indiana barely beat the eighth-seeded Hawks, a team with a losing record, in the first round. They did enough to get past the Wizards in the second round before succumbing to the Heat in the conference finals.

On paper, the Pacers’ season – an Eastern Conference-best 56 wins, two playoff series victories – met preseason expectations or came very close. But their late losses were so inept, the team frequently faced questions about its implosion. 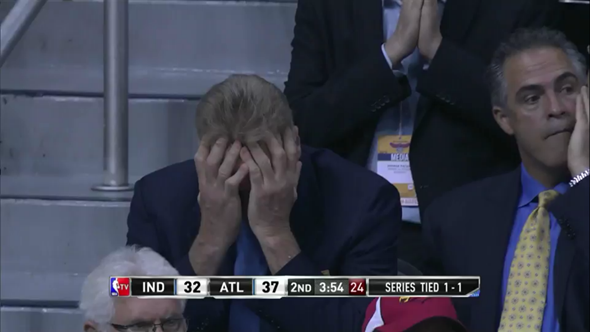 How about Pacers president Larry Bird burying his face in his hands as Indiana struggled through the first round-round of the playoffs?

Or, if you want to back to a simpler time, it’s Paul George’s 360-degree dunk:

Keys to the Pacers season:

Making do without Paul George and Lance Stephenson: George suffered a season-ending injury during a Team USA scrimmage, and Stephenson signed with the Hornets.

How will Indiana cope without its minutes leaders from a season ago? History, as well as common sense, suggests not well.

George is a bona fide NBA star, and Stephenson’s all-around game nearly made him an All-Star season. They were paramount to what the Pacers did on both ends of the floor, and their losses will be felt – hard.

The only question just how much Indiana will miss those two.

Finding scoring: In the last eight years, these last couple Pacers teams stand alone for their success despite their lackluster offense.

And that was with George and Stephenson.

David West can score inside and from mid-range, but he’s 34. George Hill is more of a complementary player than a true lead guard. And Roy Hibbert is prone to disappearing.

Indiana’s offense – already a weak spot – is really trying to dig itself out of a hole.

Roy Hibbert stepping up: If the Pacers are going to overcome their offensive issues, their defense must remain stout, and that starts with Hibbert in the middle. For much of last season, he was the NBA’s most-impactful player. Even when he slumped in the second half, his offense fell far more than his defense. The responsibility remains with Hibbert to anchor Indiana’s defense, this time with even less resistance in front of him.

Hibbert must juggle that task with re-gaining his footing offensively. When confident, Hibbert uses his size to score inside at a helpful clip. But in last year’s playoffs, Hibbert lost his way. The Pacers are no longer good enough to win when he plays like that.

Frank Vogel coaching better or differently: Indiana had one of the NBA’s strongest identities last season, always playing big lineups – even when offensive spacing suffered and the defense was too slow.

When the Pacers played well, that style looked forceful. When they didn’t, it looked stubborn.

It didn’t have to be that way, though. Chris Copeland was buried on the bench, and George could have played some small-ball four. But Vogel refused to shift his system.

This year, with a sudden talent disadvantage, Vogel will either have to coach his desired scheme more effectively or show more flexibility.

Why you should watch: The Pacers couldn’t handle success last season, falling apart in can’t-look-away fashion. How will they handle failure? Barring some surprising developments, we might soon know – and that could be even more dramatic than last season.

And if there are surprising developments – Hill showing a more expansive offensive game? Hibbert dominating inside? West defying aging? – that will be interesting, too.

Prediction: 33-49. This team just doesn’t have the talent to compete anymore. Maybe the Pacers, with the right breaks, could make the playoffs. But where is that going to get them?

Larry Bird was already testing the market for Hibbert. George’s injury could put him over the edge.

If the Pacers struggle early, don’t be surprised to see the Pacers president punt on this season in order to better equip the team – both through trade and tanking – for when George returns.