Therefore, apparently using the transitive property, Johnson has convinced himself he dislikes 3-pointers.

Johnson, via Eric Pincus at the Los Angeles Times:

"The team is better than what we had last season, because we have more guys who can do more things than just shoot 3-pointers," said Johnson.  "If I don’t see another 3-pointer from a Laker team, I’ll be happy."

The Lakers actually shot pretty well on 3-pointers last year, making 38 percent of their attempts, third-best in the NBA. It was the rest of their skills that caused them to go 27-55. Outside shooting was a bright spot.

But as he’s wont to do, Johnson is speaking from a place not rooted in the reality of the present.

So because he didn’t shoot 3-pointers, his beloved Lakers shouldn’t.

In other words, the Lakers were more efficient on 3-pointers last season than any team has ever been on all shots. 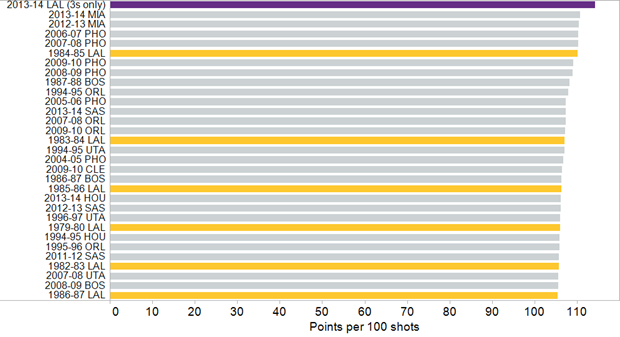 Of course, if the 2013-14 Lakers shot only 3-pointers, their efficiency would have dropped considerably. I’m in no way suggesting their outside shooting was the greatest offensive weapon in NBA history. But considering how well that shot stacks up with the production of all-time great offenses – even the five Johnson-led teams in the top 30 of points per shot – 3-point-attempts from the 2013-14 Lakers were incredibly valuable.

That’s just the way the league is changing. Players are better than ever from beyond the arc, and those attempts help space the floor for interior scorers. Now, 3-pointers are a double-edged sword, giving teams efficient points from long distance and setting them up for efficient interior scoring.

Future Lakers teams shouldn’t spurn outside shots due to a bad association with D’Antoni.

Not that I count on Johnson-approved Byron Scott to fall into such a trap.

Hopefully, Magic doesn’t turn on Scott for not being Phil Jackson, too.