I couldn’t understand how Kyrie Irving got both a player option and the full 30 percent possible through the Derrick Rose rule on his contract extension.

After all, Paul George set the market by taking just 27 percent in order to get that fifth-year player option.

Turns out, contrary to a previous report, Irving didn’t actually get the full 30 percent.

Irving will receive just 27.5 percent of an adjusted NBA salary cap if he triggers the Derrick Rose rule by winning MVP or getting voted an All-Star starter next season, according to Mark Deeks of ShamSports.com.

The actual amount of money at stake won’t be known until the 2015-16 salary cap is set next year, once Irving playing out the final season of his rookie-scale contract. But using the NBA’s projected salary cap of $66.3 million, we can estimate the figures. 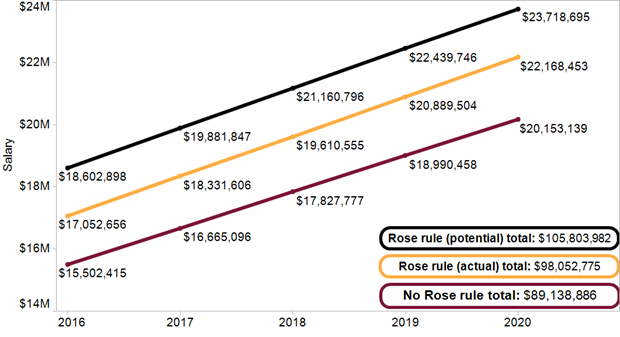 If Irving neither wins MVP or gets voted an All-Starter, his contract extension will be worth the max possible amount (about $89 million). If he achieves either of those honors, he’d gain about $9 million. However, he could have gained more than $16 million.

By leaving that potential $7 million on the table, Irving set himself up to become a free agent sooner, 2019 rather than 2020. In about five years – or one if Irving reaches neither applicable Rose-rule condition – we’ll know whether that paid off for him.