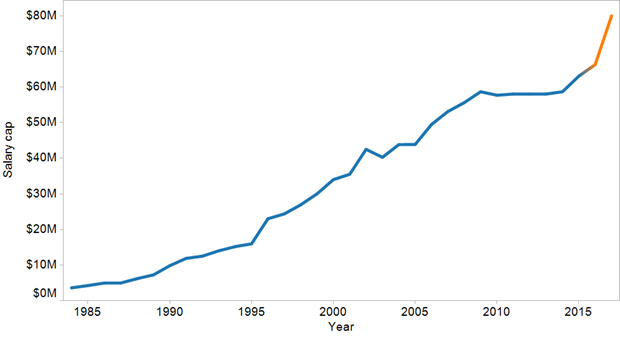 The blue section of the line in the above image represents the actual NBA salary cap (data via RealGM).

After years of steady growth followed by stagnancy until this year, the salary cap rocketing upward could cause all sorts of complications. Already, players – including LeBron James – are structuring their contracts to take advantage of the predicted high cap.

However, the NBA has other ideas.

Executives on lots of teams have gotten the sense from the league office that the NBA will try to smooth the increase of the cap level to minimize the impact of any massive one-year jump in revenue. Exactly how it would do that is unclear. The precise team salary cap — $58 million last season, $63 million this season — is tied to overall league revenues; the two rise and fall together. Players are guaranteed about 50 percent of the league’s “basketball-related income,” and the league and union set the cap figure so player salaries add up to a number in that 50 percent ballpark.

The league’s specific plan for smoothing out the cap increase is unclear, and in the end, it may opt against doing so at all. The players will receive their guaranteed 50 percent share of revenues regardless of any engineering.

There are a lot of roadblocks to smoothing the cap’s growth.

The cap is set by formula based on league-wide revenue. The only way, under the current rules, for the cap to be less is for revenues to be less.

Perhaps, the NBA could bargain with the National Basketball Players Association, offering a higher percentage of revenues in future years in exchange for the players getting a reduced cut in 2016-17. But only current players would be voting on that proposal, and they want the money coming in while they’re still in the league.

Kevin Pelton of ESPN has suggested the NBA structure its new TV deal so the money arrives in strategic stages rather than too much at once, but that runs into a similar issue. I can’t see current owners deferring revenue they could get sooner than later just to keep some of it from the players.

Adam Silver has frequently called the players “partners” in the league’s growth. In the end, I think he’ll have to heed those words and watch the salary cap – and therefore, player salaries – suddenly soar as the owners get a huge influx of revenue.

It’s not a bad problem for anyone involved.