Giannis Antetokounmpo has a rare skillset for a 6-foot-9 player.

Considering Antetokounmpo is now 6-foot-11, his skillset is even rarer for his size.

Of course, the Bucks’ 2013 first-round pick is still harnessing his raw talent. That’s understandable for someone who’s just 19.

But new Milwaukee coach Jason Kidd has a very creative idea for making the most of Antetokounmpo’s skills.

Bucks coach Jason Kidd was asked about the point forward.

“The what?” Kidd responded, hearing the question just fine about Giannis Antetokounmpo handling the ball a lot more but not liking the position description.

“With the group we have right now, with B-Knight and Giannis, we have additional playmakers and when we have that on the floor, it makes the game easy. We’ll see how the roster shakes out, but we’re not afraid to play him at the point, as you see.”

Depending on the offensive scheme, there might be only minor differences between a point forward and a point guard, but putting the ball in Antetokounmpo’s hands that much says something about Kidd’s confidence in him.

Antetokounmpo would tower over other projected starting point guards: 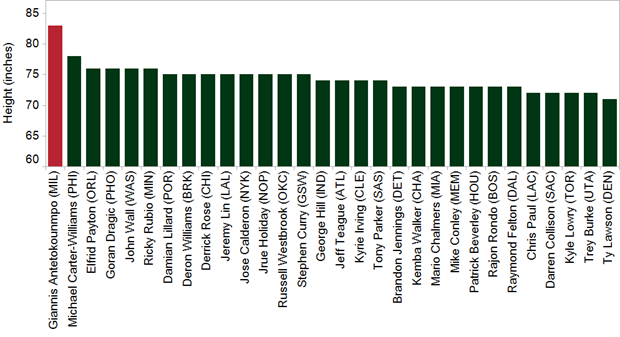 The Bucks might not be good next season, but Kidd continues to make them interesting.