Now, Portland wants to pay him as much as possible in order to keep him.

Joe Freeman of The Oregonian:

LaMarcus Aldridge tells The Oregonian he will not sign a contract extension with #Blazers this offseason, but plans to do so next summer.

Aldridge said it makes most sense financially to wait because he can sign for more years (5) and make more money ($108 million) next year.

Aldridge: "I'm happy to stay (in Portland), happy to be here, happy with the direction the team has gone the last year or 2. But …" (cont)

Aldridge cont: "… I just want to get a 5-year deal. I feel like that’s the best decision on my part."

LaMarcus Aldridge said he wants to finish his career in Portland. One reason why: "I want to be the best Blazer. Ever."

Aldridge is happy in Portland now. This is all about money.

He can sign a three-year extension that would pay him $55,490,801 over the following three years.

Or he can wait to become a free agent in 2015, when – based on a rough salary-cap estimate in which the cap rises annually by the same amount it’s projected to rise this year – he could sign a five-year contract worth up to $109,106,328. 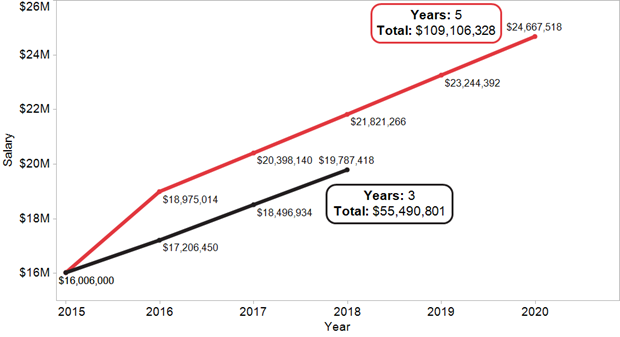 Though playing out his existing contract and seeking a new deal rather than taking an extension seems like the smart move, Aldridge is taking a risk. He turns 29 next week. At 30, will he definitely command a max contract?

Aldridge’s stock has never been higher. It’s also possible it never will be higher.

This path carries risk for the Trail Blazers, too. Maybe they save money negotiating next summer if Aldridge has a down year, but they could lose him entirely. Even if he enters free agency intent on staying in Portland, it would be foolish for him not to at least meet with other teams at that point. And then what if he unexpectedly really likes a pitch he hears?

That’s why the Trail Blazers want to lock up Aldridge now. Thanks to the new CBA’s restrictive view on contract extensions, though, it just won’t happen.

One other thing to keep an eye on: Aldridge’s next season will be his ninth in the league. NBA max contracts are determined by experience level, and that’s split into three tiers – 0-6 years, 7-9 years and 10+ years. Maybe Portland could sell Aldridge on a one-year extension, so he becomes a free agent in 2016 seeking the 10-years-of-experience max – roughly projected to be $135,788,543 over five years.

The Trail Blazers would keep Aldridge under contract for an extra season, and he’d get a little more short-term security. The big risk for him would be trying to draw a max contract at age 31, but he’s prepared to go for it at 30. What’s one more year?