Trevor Ariza knows how this works.

With a career year for the Wizards this season, Ariza completed Step 1 – just as he did in 2009, when he drew a five-year, nearly $34 million contract.

Here are Ariza’s win shares each season of his career. The red spikes represent the seasons before he became an unrestricted free agent. 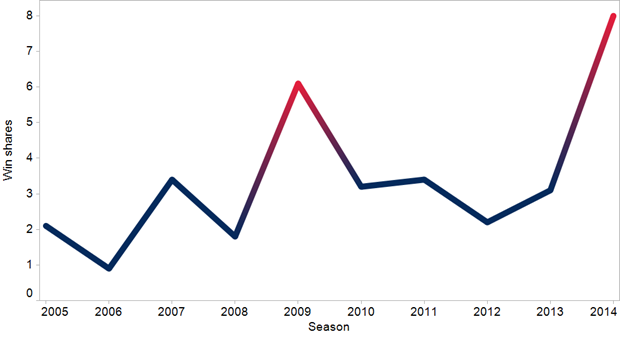 Ariza is in Los Angeles working on Step 2, but the $60 million contract Washington just gave Marcin Gortat – who earned the same $7,727,280 salary as Ariza last season – has Ariza ready to pounce.

Soon after Marcin Gortat re-signed for five years and $60 million with the Wizards, Trevor Ariza — in a somewhat surprising move — was on the phone with the front office to work out details on what could turn into a deal late Tuesday, several people with knowledge of the situation told CSN Washington.

Ariza was expected to take a few days, after hearing pitches from other teams, before getting on the phone with president Ernie Grunfeld to discuss a possible deal. However, a person with knowledge of the situation said he may have been “inspired” to just get a deal done such as Gortat who didn’t hesitate in re-signing.

If Ernie Grunfeld is handing out $60 million contracts, Ariza wants to know where he can sign. There’s no need to leverage for more if extracting a high salary from Washington is this easy.

The Wizards bought Gortat’s loyalty. If they want to do the same for Ariza, I’m sure he’d also pledge his allegiance to the Wiz.