Just like 2003, when they celebrated another title and Robinson’s retirement.

In 2014, it’s too late for any more beginnings. Is this another end?

Long after Robinson closed the Spurs’ Twin Towers chapter, Duncan is still celebrating championships with him.

Duncan has transcended eras, winning with Robinson as his partner in crime then with a guard attack led by Tony Parker and Manu Ginobili and now with Kawhi Leonard winning Finals MVP. Robinson, meanwhile, is enjoying retirement and showing up for closeout games in San Antonio.

It’s a blessed life for both.

When Duncan entered the NBA in 1997, Robinson mentored him. Duncan was such a quick learner and skilled player, Robinson was the last of Duncan’s teammates to carry more-impressive credentials than him. That’s why Robinson holds such a special place to Duncan.

Robinson was the last Hall of Famer to retire after a championship season, going out on top in 2003. Duncan could do the same this year.

Asked whether it would be difficult to walk away from such a strong team, Duncan said, “Uh, yeah.” But he quickly shut down the discussion.

“I’m guessing you’re leading me into a question that I’m not going to answer,” Duncan said. “So, I will just go ahead and avoid that one.”

Unlike Duncan – who faces a June 24 deadline to exercise his player option – Robinson announced his retirement before his last championship season. Well before he celebrated in 2003, everyone knew that was the end.

If Duncan never plays again, that would be a huge surprise.

Like Robinson, Duncan remained a reliable contributor through his most recent season. Robinson hit several career lows in 2003, but dropping from such a high peak, he remeained a reliable starter. Of the nine Hall of Famers who won a championship in their last season,* none had played as effectively in their final season in more than 30 years.

Robinson went out on top, but he also went out still playing well.

I suspect that Robinson did so is the main reason so much speculation exists about Duncan following suit. (And the fact that Duncan is 38.)

But Robinson backed himself into a corner – perhaps for the very purpose of not giving himself a chance to second-guess the decision – by announcing his retirement so far in advance. Duncan has not, and as he admitted, it would be very difficult to walk away from all this.

Throughout his post-game interviews, Duncan gave somewhat-conflicting hints about his future.

Asked why he was especially emotional after this title, he said “Just the close of a career. I know it’s coming to an end. I don’t know if I’ll ever have a chance to do this again.”

But he also said, “I’ve always said, as long as I feel I’m going to be effective, I’m going to want to play. And I still feel effective.”

Duncan has now become just the third player to win titles 15 years apart – and the only to do so with the same team. 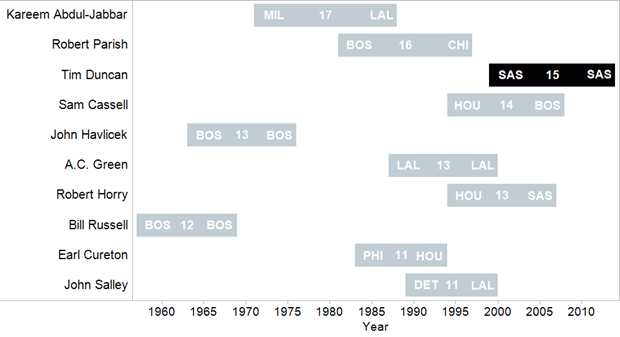 Parish retired after his final championship, but by then, he was a bench-warmer with the Bulls.

Abdul-Jabbar returned for one more season after his last title and again reached the Finals. His Lakers were swept by the Pistons, but he received one last standing ovation on the game’s biggest stage as he exited for the final time.

I suspect Duncan will be back next season – and not for the sendoff.