The NBA just ratified a new Collective Bargaining Agreement that, among other things, limits a team’s ability to acquire multiple highly paid stars.

Yet, the Heat might chase Carmelo Anthony to join LeBron James, Dwyane Wade and Chris Bosh in Miami.

How can that happen?

There infinite ways the Heat could make room for Melo, but let’s examine a few baseline scenarios. Let’s begin with Miami’s starting position.

Miami has seven players who might be under contract for next season: LeBron, Wade, Bosh, Udonis Haslem, Chris Andersen, Norris Cole and Justin Hamilton.

Hamilton is good as gone. Miami could easily dump Cole and its first-round pick, which comes with a guaranteed salary, without taking back salary. If Andersen and Haslem opt in, I believe the Heat could also trade them without returning salary – perhaps attaching the first-round pick to Haslem as a sweetener if necessary.

Free agents continue to count against the cap, but other than LeBron, Bosh and Wade – who would terminate their contracts in almost any plan –  Miami could easily renounce everyone else.

Essentially, if required to sign Melo, I believe the Heat could fairly easily pare their roster to just LeBron, Wade and Bosh.

There might be some emotional attachment to casting off Haslem and even Andersen and Cole. But remember, Pat Riley practically gave away Michael Beasley in 2010, just two years removed from Miami drafting Beasley No. 2 overall and one year from him making the All-Rookie team, in order to pursue LeBron and Bosh. I think Riley would overcome any internal dilemma based on nostalgia if it meant getting Melo.

So, the rest of this post will suppose the Heat clear their roster to just LeBron, Wade and Bosh.  It also uses the latest projected salary cap, $63.2 million with a $77 million luxury tax, for 2014-15 and predicts the cap will continuously rise by the same amount it’s projected to increase this year.

How much money would everyone sacrifice?

Once Miami’s roster is down to just LeBron, Wade and Bosh – all of whom terminated their contracts in this scenario – cap holds will leave the Heat over the cap. LeBron, Wade and Bosh would each count at 150 percent of their previous salary, and Miami would have nine roster charges (equal to the rookie minimum salary) to reach the minimum roster of 12.

Once LeBron, Wade and Bosh re-sign, though, their 2014-15 salaries would replace their free agent amounts. Then Miami could use its remaining cap room to sign Melo.

If LeBron, Wade and Bosh re-sign first, they could get higher raises (7.5 percent vs. 4.5 percent) and longer contracts (five years vs. four years) than Melo, so maybe Miami’s original big three would take lower starting salaries and arrange to be on par with Melo over the long run. But for now, we’ll focus on matching salaries only next season. 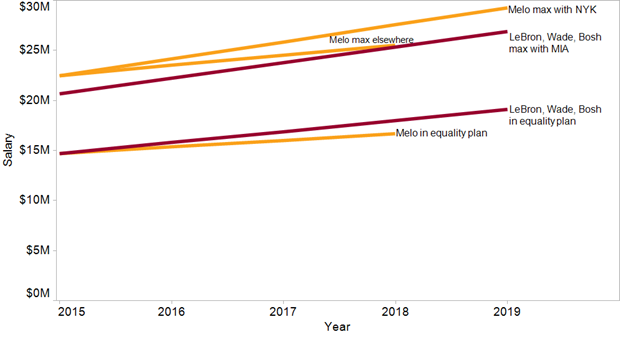 For the Heat, this would be a huge bargain. The salary cap would restrict their ability to sign all four players – and there’s nothing Micky Arison could do about it. Essentially, the rules prevent him from spending, so if LeBron, Wade and Bosh want to pursue this plan, they would have no standing to even negotiate for higher collective salaries.

Miami would then have the room mid-level exception ($2,732,000) and minimum contracts to fill its roster. By design, it’s difficult for teams to add salary quickly once they’ve gone under the salary cap.

The luxury tax would be no concern at all.

LeBron, Wade and Bosh can get paid again soon

If LeBron, Wade and Bosh re-sign, Miami would retain their bird rights. A key facet of bird rights: A team can go over the cap to re-sign players with the.

However, because free agents continue to count against the cap until signing, teams have a very limited ability to sign outside free agents and then exceed the cap to re-sign their own free agents. Hence, LeBron, Wade and Bosh would have to cut their salaries to make room for Melo this offseason.

But they wouldn’t need to make room for Melo next offseason.

LeBron, Wade and/or Bosh could sign a one-year deal – rather than a five-year deal – with the same starting salary as the equality plan. Then, next offseason, they could re-sign for max contracts – and significant raises.

Realistically, they would sign a two-year contract with a player option. That way, they could still become free agents in 2015 but would have an extra year of salary protection in case they determine their stock had fallen. (Options can only occur in the final year of a contract, so any deal longer than two years would delay getting a new max contract.)

The Heat would not hold Melo’s bird rights for three years, so he couldn’t take advantage of this plan until 2017. He’d likely receive a four-year contract with a player option regardless. 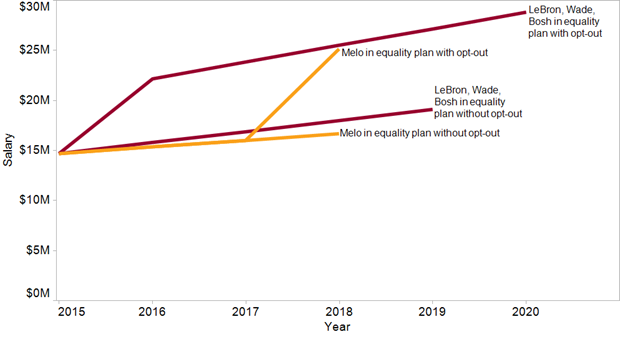 New contract from one signed in 2014 is italicized

Projecting the 2017-18 salary cap – and therefore Melo’s max as a free agent in 2018 – is so difficult this far ahead, I didn’t even bother with how a multi-year max contract signed then would play out over its duration.

In the same vein, though far less turbulent of an estimate, LeBron, Wade and Bosh would be relying on the salary cap making another large jump 2015-16. I think that’s quite possible, but there is risk.

There’s also risk in accepting a one-year or even two-year deal with a player option. If a player gets hurt or struggles for other reasons, he might make less than had he just accepted a five-year guaranteed contract. Remember, I’m examining max salaries under these scenarios. Players aren’t guaranteed the max.

But if this worked, LeBron, Wade and Bosh could sacrifice about $6 million each in 2014-15 and then make similar salaries in coming years to the max possible had they signed this offseason.

Melo would sacrifice about $24 million over the next four seasons. So, if they plan to opt out in a year, it would make even more sense for LeBron, Wade and Bosh to accept lower starting salaries than Melo.

If LeBron, Wade and/or Bosh opt out next summer to seek bigger contracts, that could make this pursuit much more expensive for Arison. Would he go for it?

What about a plan that gets expensive for the Heat owner immediately?

Miami could also acquire Melo in a sign-and-trade. That would make the apron – $4 million above the luxury-tax line – rather than the salary cap the key threshold. With a project cap of $63.2 million and luxury tax of $77 million, that’s a lot of extra wiggle room – and money to pay a big four.

In a sign-and-trade route, if they each want the same starting salary, LeBron, Wade, Bosh and Melo could each make $18,190,703 in 2014-15. That’s a significant jump from the $14,658,494 they could each make by signing Melo through cap space (especially because raises in future seasons are based on initial salary).

If the big four collectively maximizes its salary in a sign-and-trade scenario, there would be a host of complications. The Heat would have no room to sign anyone other than nine minimum-salary players and couldn’t add any salary in a trade for a year.

Of course, completing a sign-and-trade for Melo alone would be complicated. Miami, New York and several players would have to agree – making this a big longshot.

Essentially, the Heat would have to sign-and-trade their own free agents – other than LeBron, Wade and Bosh, of course – to the Knicks.

All players signed-and-trade must receive three-year contracts, but only the first year must be guaranteed. Fortunately for the Knicks if they want to go this route, they won’t have cap room this offseason anyway, even if they lose Melo. So, taking a guaranteed year of salary should be no problem. The Heat can structure all their outgoing contracts so they’re fully unguaranteed for 2015-16 and 2016-17, allowing New York to waive them and maximize its 2015 cap room.

But Miami can’t just re-sign one free agent to a salary equal to Melo’s and send him to New York. Anyone in a sign-and-trade whose salary increases by more than 20 percent brings up base-year-compensation issues and probably requires a third team to make the deal work.

However, the Heat might have enough free agents to complete a sign-and-trade on their own. (Even if renounced, a team can sign-and-trade its own free agents.) If Miami signs-and-trades Mario Chalmers, Shane Battier, Toney Douglas, James Jones, Michael Beasley and Greg Oden on contracts equal to 120 percent of their 2013-14 salaries, that would be enough to acquire Melo with a 2014-15 salary of $18,190,703 – his equality-plan number in a sign-and-trade scenario.

Of course, those six players must agree to leave Miami for New York. Why would they? The way Chalmers has struggled in the Finals, he might not make $4.8 million elsewhere any other way. Battier could participate and then retire, a way to leave an even stronger legacy in Miami. Douglas, Jones, Beasley and Oden are bit players who probably couldn’t get more money elsewhere. They’re just in the right place at the right time. (If Haslem opts in, the Heat could use him in place of Chalmers. Haslem would have no say in it.)

And why would the Knicks agree? For one, Melo would have to convince them he’s leaving regardless. The Heat would also have to send draft picks to make it worth their while. But remember, if everything else comes together, it’s easy to structure a dual sign-and-trade as not to interfere with New York’s 2015 cap space.

As before, Melo would be subject to a short contract and smaller raises than the Heat’s current big three, but all four players come out ahead of the cap-space model. 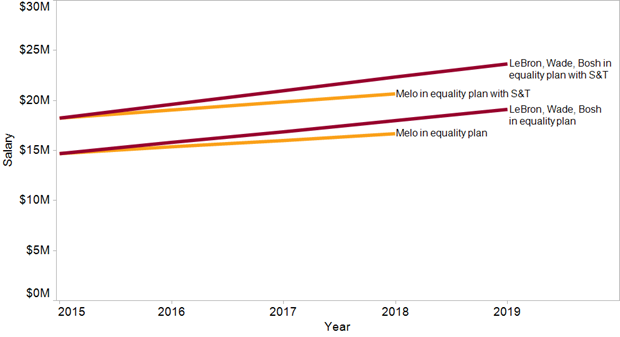 New contract from one signed in 2014 is italicized

However, what’s a win for LeBron, Wade, Bosh and Melo is not a win for Arison, at least not directly. Acquiring Melo in a sign-and-trade and filling the team to the hard cap of the apron would give the Heat a 2014-15 payroll of $87 million, including luxury-tax payments. On the hook for so much guaranteed money, they’d likely face the tax annually – and the repeater penalty.

This sign-and-trade plan, though it offers substantially higher salaries than using cap space, can be combined with the opt-out plan to get even more money to LeBron, Wade and Bosh as soon as 2015 and Melo as soon as 2017.

But a sign-and-trade, with all the moving parts, is so unlikely, let’s just stop here.

No matter what, LeBron, Wade, Bosh and Melo must collectively compromise to make this happen. That’s the new Collective Bargaining Agreement working.

The document just can’t completely prohibit players from sacrificing salary to build a team as they see fit.

So many variables remain, including what each of the four key players desires, where the cap is set and whether Miami moves its other players. There’s a lot to sort out.

But – scaled up or down depending on other influences – here’s what might work best if LeBron, Wade, Bosh and Melo are committed to making a big four:

Will it happen? Who knows?