Elementary-school students love Michael Jordan, but how do NBA superstars feel about him?

That might determine whether the Charlotte Hornets, the team Jordan owns, take the next step.

Charlotte made a surprising run to the playoffs this season, and the Hornets have a deep and relative young supporting cast around their All-NBA third-team center, Al Jefferson. But Jordan is aiming higher.

Jordan, via Rick Bonnell of The Charlotte Observer:

“I always thought it was a great destination. I think Big Al (Jefferson) proved you can come here and make a big difference,” Jordan said Monday. “Hopefully we can look at that and attract some other superstar.”

Other superstar? Hopefully, Jordan was referring to himself and not Jefferson. I’m a big fan of Jefferson and his mid-career development, but even the most liberal uses of the term wouldn’t include him.

Anyway, the Hornets will have a hard time luring a superstar for no other reason than than they haven’t shown they can support one. Since Charlotte re-entered the NBA as the Bobcats in 2004-05, only the Kings (edit: and Bucks) have had fewer All-Stars: 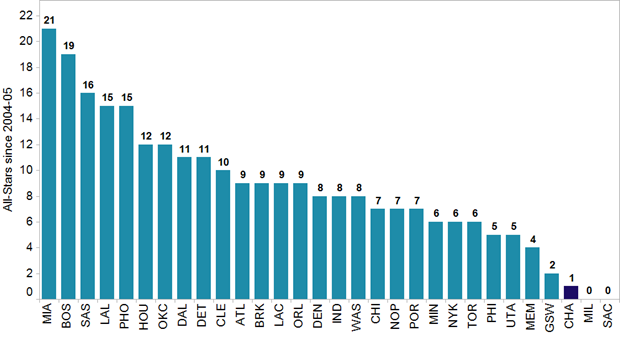 Gerald Wallace made the All-Star Game in 2010, but he’s not really a perception changer. I doubt some like, say, Carmelo Anthony would say, “Gerald Wallace really put Charlotte on the map. Now, that’s a destination.”

Jefferson might ultimately help the Hornets land a true star. He made the team better, and Charlotte has no chance of luring a superstar without already winning on the court.

Jordan is the ultimate draw. As the greatest player in NBA history, he immediately commands respect, even among this generation of players. His ties with Nike could also help make the necessary connections.

The Hornets face an uphill battle to land a superstar, and talking about getting one is easy – every team wants one – but if it’s a challenge Jordan is serious about pursuing, the mission starts with him.