Want to become a highly paid coach? There are two routes.

1. Coach very effectively, win a championship and get rewarded for your success.

The Knicks drove up the price for Steve Kerr, who, depending on the source, signed a five-year contract worth $21.25 million-$25 million with the Warriors. Spurned, New York just hired Derek Fisher for five years, $25 million. 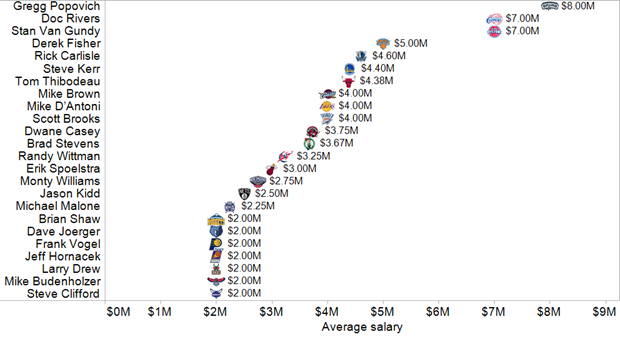 A few notes on the listed salaries: Coaching salaries are sometimes not publicly available. Exact terms, including levels of guarantees and incentives, are rarely available. Most of the above data comes via Other League.

The two teams without head coaches, the Lakers and Cavaliers, have their previous head coaches – Mike D’Antoni and Mike Brown – listed.

I also couldn’t find Flip Saunders’ salary, but it’s possible  but the Timberwolves’ new coach will be paid at least $5 million per year. Saunders – like Popovich, Rivers and Van Gundy – is also the team’s president.

One more reminder: Not only are Kerr and Fisher just coaches, they’ve coached a combined zero games as a head coach or assistant.

Some more-established coaches must see this and expect raises. Jackson and the Knicks won’t have to pay those bills themselves, but they’re changing the market.