That time seems so removed only because LeBron has so convincingly turned his outside shot into a weapon.

Since, his critics have found new complaints.

Well, LeBron has answered all the isn’t/hasn’t/can’ts. He’s made plenty of clutch shots – never mind how he’s redefined the importance of clutch passing – and won two titles.

And, to answer the incessant those critics who equate debilitating cramping with lacking a will to win, he turned to that once-weakness.

“I just trust the hard work and dedication that I put into the game,” LeBron told Doris Burke, who asked about his jumper. “When the cameras are not around, I put a lot of hard work into the game.”

After a slow start (0-for-3, all on shots within 15 feet, with a turnover), LeBron went on a personal 8-0 run midway through the fourth quarter. He hit two 3-pointers and a 19-footer on three Miami possessions, forcing a Spurs timeout.

LeBron was the first Heat player sitting on the bench, but this time, he got back up – and kept the jumpers coming. 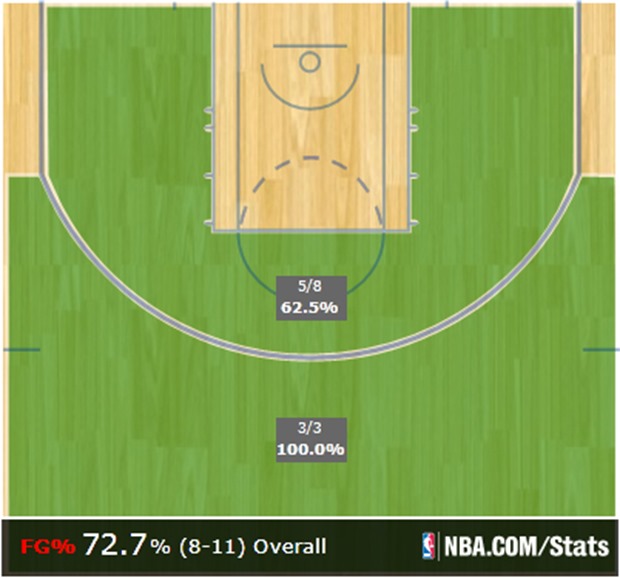 Not a single shot in the paint!

LeBron is not afraid of what his detractors say he can’t handle. He’s keenly aware of his abilities – the most vast in the league – and plays within them. That’s why I never believed he could have returned while cramping in Game 1. If LeBron could play, he would have. He couldn’t, so he didn’t.

Thankfully for Miami, LeBron could handle more than 37 minutes in Game 2 – second only to Tim Duncan (!) tonight. The Heat desperately need LeBron in these Finals.

The Spurs defend too well to allow LeBron to play to his strengths, but LeBron’s game is too diverse to completely contain. San Antonio’s defensive strategy was sound, and some of those jump shots were contested.

But LeBron is just too good. That was really the key to Game 2 – LeBron being better than everyone else.

Not that anyone will talk about that to the extent his cramps overwhelmed all other Game 1 storylines.

Nobody will praise LeBron’s fundamental dominance in pursuit of attention. Nobody will compare LeBron favorably to Michael Jordan’s all-time great jump-shooting. Nobody will tweet photos of themselves shooting jumpers and tag them #LeBronning.

Instead, LeBron has a tied series heading to Miami and the quiet satisfaction of knowing he answered his critics.

Kyrie Irving is getting traded to the Mavericks, which has blown up the NBA world — Dallas looks like a threat in the West, and there is a countdown clock over Kevin Durant‘s time in Brooklyn. It wasn’t just fans and pundits stunned by the news, NBA players past and present took to Twitter and social media to react and give their thoughts on the Irving trade. Starting with one of the guys in the trade.