Does this old, run-down, over-the-hill team still have what it takes to win a championship?

The question never stops lurking and will play a prominent role in discussion of the 2014 NBA Finals.

Unfortunately, it will usually be applied to the wrong team.

The Miami Heat – not the San Antonio Spurs – are the old team in these Finals.

*Weighted by minutes played, using a constant of a player’s age on Feb. 1 of that season

This is not a revelation. Merely, it’s a repeat of last year and a continuation of a half-decade trend.

Miami and San Antonio have both made the playoffs each of the last five years. Though the Heat started considerably younger, they’ve aged since signing LeBron James, Chris Bosh and Dwyane Wade. The Spurs, meanwhile, have fluctuated while trending younger.

Here’s each team’s average age during the playoffs in the last five years – the Heat in red and Spurs in black: 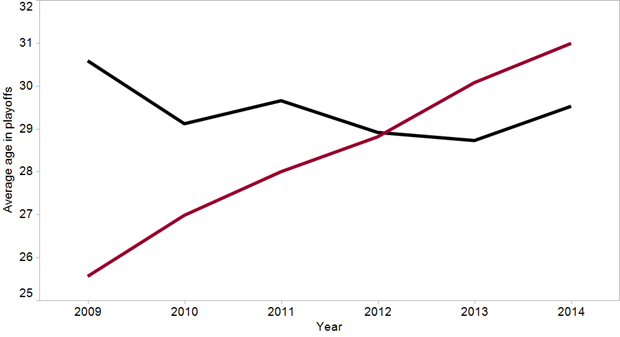 But those six alone don’t tell the entire story.

Miami has also continuously depended on its big three as they’ve aged a year each season. San Antonio has deemphasized Duncan, Ginobili and Parker as they’ve aged. When evaluating age by weighing for playing time, that matters a great deal.

The Heat aren’t too old to win a title. The Mavericks were even older when they won in 2011.

But if we’re going to question anyone’s age in these Finals, it should be the fogeys in Miami.