Dribbling out the final moments of Game 4 with the Heat up 102-90, Dwyane Wade committed a shot-clock violation with 0.4 seconds remaining. Begrudgingly, George Hill went to inbound the ball to close the game. He cared so little about that final pass, he threw it to Wade and committed yet another Pacers turnover.

Before Hill threw in the ball, LeBron James looked to the far end of the court, smiled and pointed. Maybe his mind had wandered elsewhere. The game’s result was no longer in question, and he certainly deserved to unwind after relentlessly tormenting Indiana all night.

Or maybe he was pointing out Chris Bosh, who’d returned to the other end of the court to defend what was, for everyone else, a meaningless play.

Bosh came to play Monday – opening Game 4 on a personal 8-0 run and scoring 25 points – and didn’t stop until his task was completely finished.

The Heat have struggled with slow starts in this series, but they never trailed in Game 4. What changed?

Bosh scored 10 points in the first half of the first quarter – more than his full-game scoring in any other game this series.

The Pacers needed most of the first quarter just to pass Bosh himself in scoring.

On the other end of the court, Bosh helped hold Roy Hibbert scoreless. Though Hibbert is clearly in his own head at this point, Bosh’s early defense helped Hibbert get there. Hibbert has a significant size advantage, but Bosh helped keep the ball from his hands early, and Hibbert never got into the game.

Remarkably, this is the first time Bosh has outscored Hibbert in a playoff game. Here are their point totals in the Miami-Indiana matchups the last three years. (Bosh missed Games 2-6 of the 2012 second-round series.)

Bosh is red, and Hibbert is blue. 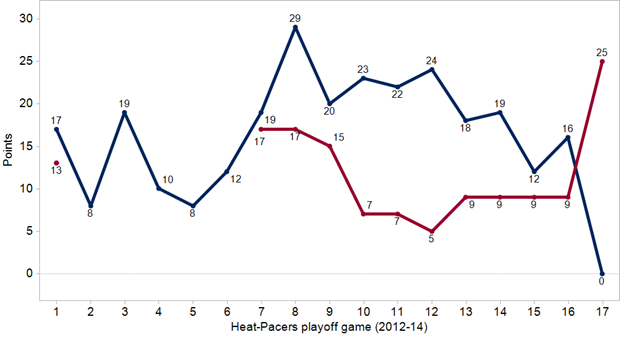 But even when Bosh makes the little plays, scoring is a key part of his game. Not all of Bosh’s reasonably expected contributions get noticed by casual observers, but some definitely do.

Monday, Bosh did everything – big and small – to help the Heat. On both sides of the ball, they performed so much better when he was off the court compared to when he was on it.

Miami had no trouble winning this game, and that’s because Bosh showed up and never let up. The Heat now lead the series 3-1, taking complete control.

And they did it following Bosh.

As long as Miami keeps taking direction from Bosh – and maintaining maximum focus until the very end – this series is over.