“– from Toronto Canada and the University of Nevada-Las Vegas.”

Since that shocking moment at the Barclays Center last June, the top of the 2013 draft class has hardly made a peep.

Even the All-Rookie teams, typically an occasion to highlight high draft picks, included little inclusion from the class’ top 10 picks. Victor Oladipo (No. 2) and Trey Burke (No. 9) made the first team, and Cody Zeller (No. 4) made the second team. Otherwise, the draft’s top 10 missed the cut.

No top 10 of a draft class since the NBA added an All-Rookie second team in 1988-89 has had such a paltry All-Rookie showing.

Every other draft class has produced at least five All-Rookie selections from its top 10.

Here is a year-by-year, pick-by-pick history since the NBA added an All-Rookie second team both with names and visualized versions (first team in blue, second team in orange). Click to enlarge. 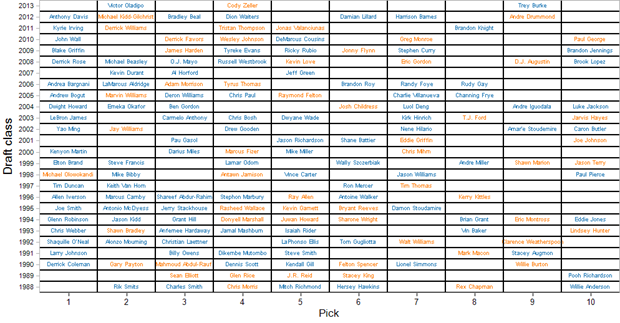 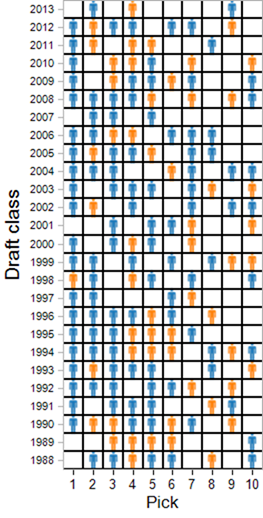 Even with just five first-team and no second-team spots available, most draft classes between when the NBA began naming All-Rookie teams in 1963 and 1988 featured more top 10 picks making an All-Rookie team than 2013.

This is a pretty bad sign for the top of the class of 2013. Top-10 picks, due to their increased exposure, tend to get the benefit of the doubt in these award votes.

Joakim Noah, Mike Conley and DeMar DeRozan each recently missed an All-Rookie team after being selected in the top 10, and they’re having fine careers. There are plenty of other examples, too.

Plus, Noel is still eligible to make an All-Rookie team next season and revise these dreadful numbers.

Of course, he’ll be competing with the top of a draft class that will probably fare much better.