Making the playoffs in the NBA isn’t that hard. Each year, most teams do it.

It especially shouldn’t be difficult for a team with a superstar, who really tips the scales in a sport where just 10 players participate at a time.

So, why hasn’t Kevin Love reached the postseason?

Love entered the NBA as a skilled player ready to contribute, and as he’s gotten in better shape and more aggressive, he’s developed into one of the league’s top players. Yet, he’s never made the playoffs

Here are the 25 players with the most win shares in their first six seasons not to reach the postseason (those who spent that entire time with one team in green): 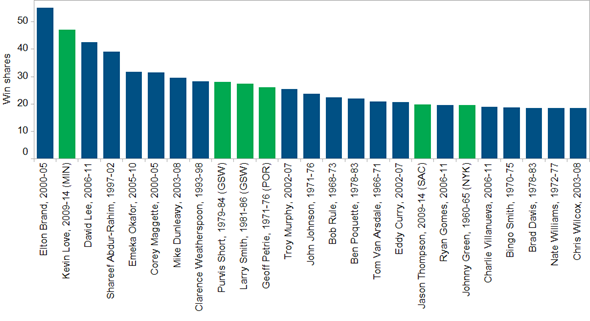 Only Elton Brand, who was drafted by the Bulls and then traded to the Clippers following two years in Chicago, had more win shares in his first six seasons than Love and didn’t make the playoffs.

Love is the best player to spend his first six seasons on the same team without making the playoffs.

That could make him overrated — why has such a good player continuously missed the postseason? Or it could mean he’s paid his dues and should be allowed by the court of public opinion to leave Minnesota without scorn.

There are certainly elements of truth in both sides, but I tend to side with the latter outlook.

Win shares probably overrate Love, who chases rebounds over playing sound defense. Rebounds show up in the box score and are a key piece of the win-share formula, and individual defense remains difficult to quantify.

But the win-share gap between Love and the next-closest player on the list – Pervis Short with the Warriors back in the 80s – is substantial. It’s difficult to believe Short makes that up with aspects of the game not reflected in win shares.

Simply, Love’s situation is unprecedented. Nobody has ever played so well through six seasons without making the playoffs, and it’s because the Timberwolves failed to properly support him.

They wasted time with Kurt Rambis, Jonny Flynn and Wesley Johnson . Even this season, when they assembled an underrated and successful starting lineup, their bench and late-game execution did them in.

Of course, Love is culpable in Minnesota’s crunch-time problems. You can’t easily separate his own issues with Minnesota’s.

But, soon enough, you can separate him from the Timberwolves’.