Kevin Love wants to leave Minnesota, and the Timberwolves might trade him.

But they’ll trade him only if they get an enticing offer. Otherwise, it makes more sense to take their chances – no matter how slim – that Love actually follows through and leaves money on the table to depart Minnesota in 2015.

So, how can Love persuade the Warriors, Bulls, Rockets, Celtics or any other team to make Minnesota a satisfactory proposal?

He can agree to remain under contract beyond next season.

Knowing Love can become a free agent in 2015 will lower the quality of assets teams will relinquish in a trade for him. After the Lakers traded for Dwight Howard only to see him walk in free agency a year later, teams will be especially hesitant to get caught in the same position.

But Love can put those concerns at ease by agreeing to an extend-and-trade or exercising his 2015-16 player option ($16,744,219) contingent on a deal. And by agreeing to do either only for certain teams, he can effectively dictate where he’s traded.

Here are the paths Love’s max salary could travel over the upcoming years depending on whether he opts in (green), opts out (blue) or agrees to an extend and trade (black) using a rough salary-cap estimate that increases each year by the amount it’s projected to this year. 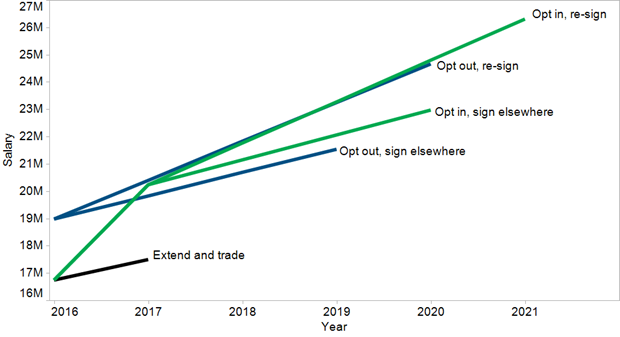 It’s in Love’s best financial interest – whether he opts in or out – to re-sign with whatever team he’s playing for when his contract expires. That’s why it’s important Love plays his cards correctly now.

An extend and trade (if signed after the the July moratorium) would best serve Love if he opts in to the final year of his existing contract, but the deal could last only one additional season. Financially, it’s a poor option, but guaranteeing his next team three years might be the best way to secure a trade.

Possibly, a team would trade for Love without the guarantee he’ll opt in. But, again, that’s headed toward the area where teams might not surrender enough to convince Minnesota to pull the trigger.

If Love wants to force a trade, he has some leverage. Opting in to the final year of his contract would cost him money next season, but if that’s what it takes to get him to place he wants to re-sign, it will make him money in the long run.