1) How much can/will the Wizards stretch the Pacers?

The Hawks took Indiana to seven games by stretching the floor, pulling Roy Hibbert out of the paint and gunning 3-pointers.

That was Atlanta’s identity. It’s not exactly the Wizards’.

Washington’s four most-used bigs – Marcin Gortat, Nene, Trevor Booker and Kevin Seraphin – lack range to shoot from the perimeter. And typically, the Wizards used two of them at a time.

In a first-round win over the Bulls, Gortat, Nene and Booker (Seraphin didn’t make the rotation) were Washington’s power forward-center combination 84 percent of the time. In the regular-season, the Wizards weren’t quite as dependent on a non-shooting PF-C combo, but they still used one 65 percent of the time. 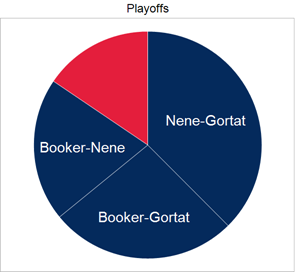 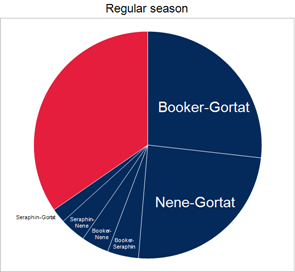 Fortunately for the Wizards, they have a couple bigs with shooting range on the roster: Al Harrington and Drew Gooden. Those two played together frequently, building a bit of chemistry and making them more effective in tandem Trevor Ariza can also play small-ball power forward.

So, the Wizards can definitely stretch the floor at times. The main question is how much they’re willing to alter their rotation to do it more.

Would Randy Wittman do something radical – staring Harrington and Gooden – and force the Pacers to make the adjustments they’re reluctant to make? Harrington and Gooden playing together at any point would wrinkle Indiana’s preferred scheme, but if they play together with Hibbert and a tradition power forward (David West or Luis Scola) in the game, it would go much further.

Wittman should deploy Harrington and Gooden primarily against Hibbert, but matching rotations could be difficult. Doing so to begin halves would be the simplest – and most daring – way to do it.

The Wizards might not have to go to such extreme measures, but the goal – stretching the floor – should play a big factor in this series.

2) Will the Pacers protect the ball?

The Pacers are not a good passing team, and the Wizards excelled at forcing turnovers during the regular season.

Against Chicago’s limited offense, the Wizards didn’t take quite as many chances going for turnovers. They just played sound defense and let the Bulls miss shots.

How will Washington approach the Pacers’ never-good, lately imploding offense? The question might be decided on the other end of the floor.

If the Wizards can score against Indiana’s once-stout defense, they can afford to lower variance defensively. If they can’t, they might need to go for turnovers and the fastbreak points steals generate – even if that strategy allows the Pacers more layups and dunks due to out-of-position defenders.

3) Have Roy Hibbert and the rest of the Pacers lost their mental edge?

Indiana finished the season with a 10-13 stretch and then struggled more than most expected in a first-round win over the Hawks. No Pacer has fallen harder than Hibbert, who went from All-Star to nearly benched.

But Vogel stuck with the center, and Hibbert rewarded that faith with 13 points, seven rebounds and five blocks in a Game 7 win over Atlanta. Unquestionably, the Hawks were a bad matchup for Hibbert, but that doesn’t explain his second-half slide. It’s tough to say exactly where Hibbert stands entering this series.

Maybe rallying to win from down 2-1 and 3-2 to Atlanta has righted the Pacers’ ship. More likely, they remain fragile.

Where is Hibbert’s confidence? Where is Indiana’s? Where the answers fall on the spectrum could determine the series.

For most of the season, the Pacers were the better team. But it matters only which is better now.