In 2010, the Charlotte Bobcats were excited just to make the playoffs.

The Bobcats started as an expansion team in 2004-05, and it took six years just to reach the postseason. There, they were swept by the Orlando Magic.

“They know how to play playoff basketball,” then-Bobcats coach Larry Brown said. “We haven’t figured it out yet.”

The Bobcats still haven’t figured it out.

Tonight could have been Game 5 of the Bobcats-Heat series. Instead, Charlotte was swept by the Heat, dropping its playoff record to 0-8.

The Bobcats will change their name and try again next season as the Hornets for that playoff victory. But even if it comes that soon, it would be 11 years since the franchise’s inception.

Of course, the NBA’s size and playoff structure has changed, and it’s arguably harder now than ever to win a postseason game. 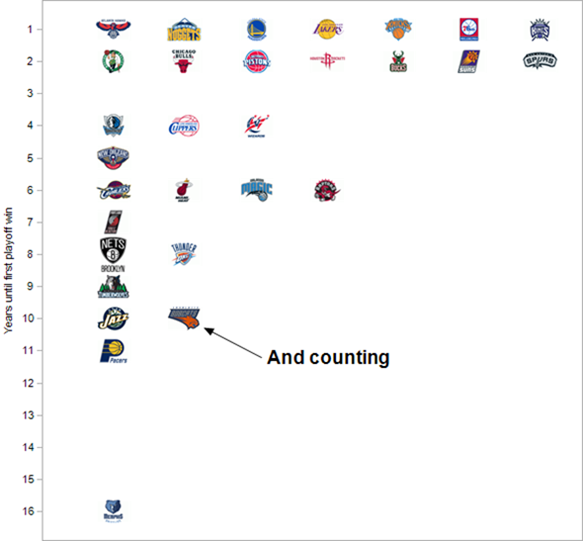 If the Hornets win a playoff game next year, they’d tie the Pacers for the second-longest wait for a franchise’s first playoff win (11 seasons). If it takes any longer, there’d be only one more franchise that took longer.

At least the Grizzlies, who needed 16 years, give Charlotte a little buffer.