With his feet held to the fire, Dwight Howard brought the heat.

It took only one playoff game with the Houston Rockets for Howard’s detractors to come out in full force. He lacked the maturity and focus to win in the postseason, they shouted from all directions. But if Howard thought he could escape the spotlight by bolting Los Angeles for Houston, he was sadly mistaken.

Right now, though, Howard and his Rockets have a bigger problem to escape – LaMarcus Aldridge.

In two games, Aldridge has 89 points, 26 rebounds and five blocks. More importantly, the Trail Blazers have two wins in Houston.

Teams that open a best-of-seven series with two road wins have won 15 of 18, including sweeping half of them. With Portland rolling, having won seven straight and 11 of 12 dating back to the regular season, this series could join the quick enders.

Howard has lost his last seven and 11 of 13 playoff games, and for him, the doubters will grow only louder. Not even ultra-focused and effective starts will save him.

“We have to play inside out, play their bigs and make it a long night for those guys,” Howard told Jonathan Feigen of Ultimate Rockets before the game. “I have to demand the ball, get it and go to work.”

Howard made his first six shots to notch Houston’s first 13 points, outscored the Trail Blazers by himself through the game’s first four minutes and was singlehandedly matching his teammates’ combined scoring  as late as three minutes remaining in the first half.

By halftime, he had 25 points, eight rebounds and two blocks.

His second-half production (seven points, six rebounds and two blocks) would be great for most players, but Howard isn’t most players. His physical talents lend themselves to the perception he should be more dominant – which a petty Shaquille O’Neal perpetuates during halftimes – and more is demanded of him.

Sometimes, that’s fair. Howard failed to pass out of double teams Wednesday, and his individual success remained isolated from team success. Howard’s teammates shot just 37 percent while he was on the court, and when he went cold (missing seven straight shots at one point), he still didn’t integrate his teammates well enough.

But sometimes, the demands on Howard reach unhealthy levels. He said he’d do more in Game 2, and he absolutely did. There are limits on what one player can contribute. Even if Howard didn’t perfectly parlay the attention he received into better looks for his teammates, James Harden (6-of-19 shooting) and Chandler Parsons (5-of-15 shooting) are certainly capable of doing more without their center’s help.

Not that anyone will forgive Howard for the shortcomings of his teammates. Howard’s playoff record is treated as his own although we all know postseason success requires a full team effort.

In a twist, Aldridge gets all the benefit of the doubt Howard doesn’t. Aldridge’s 46 points and 18 rebounds in a Game 1 victory gave him leeway Howard will never receive.

But Aldridge – who has never won a playoff series, let alone led a team to the NBA finals like Howard did the Magic – didn’t rest on his laurels.

He became the first player with consecutive 40-point playoff games since LeBron James in 2009 and just the second since Tracy McGrady in 2003.

Aldridge knifed through the Rockets’ defense off the ball and used expert footwork on the ball to create space, shooting 13-of-19 from mid-range. 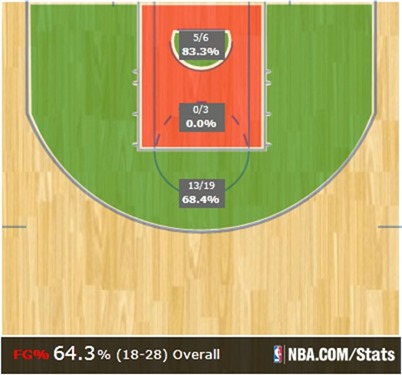 Dorell Wright made 3-of-4 3-pointers and added a slick cutting dunk for 15 points on five shots. Damian Lillard shot just 3-for-14, but he got the line (10-of-12 on free throws) and kept the ball moving to the right spots (11 assists).

Howard vs. Aldridge was a tantalizingly fun matchup, and Rockets-Blazers is too. If not for a couple different breaks in an overtime game Sunday, the series could be tied 1-1. Heck, Houston wasn’t that far from winning Game 2.

But in Howard’s world, close doesn’t cut it. Only Aldridge’s.

Not that he needs the margin for error.