LaMarcus Aldridge has scored and 46 and 43 points in two playoff games. To be Captain Obvious, that’s a lot.

In fact, his 44.5 points per game would break break the all-time single-playoff scoring record:

The easiest way to do so would be losing to the Rockets. Maintaining such a high scoring average is much more difficult over a larger sample. Jordan’s 43.7  came in a three-game sweep at the hands of the Celtics. In fact, six of the instances on the above list (including Aldridge) came from teams that didn’t advance past the first round.

At minimum, Aldridge must pad his numbers against Houston before advancing. The Rockets’ inability to double-team him in space has left him plenty of good looks – at least by his standards – from mid-range. This is a good matchup for him.

The next round, due to regression to the mean alone, will likely be tougher. Plus, the Spurs or Mavericks will have more time to scout him and find ways to limit his effectiveness.

Aldridge had similar regular-season scoring numbers against Dallas and Houston (a little more per game against Houston, a little more per minute against Dallas), and the Mavericks’ defensive reputation suggests an easier time. However, he shot 56 percent against San Antonio in the regular season – by far his best mark against a Western Conference playoff team.

But, if the Trail Blazers advance, Terry Stotts won’t gameplan for the next series with the primary goal of preserving Aldridge’s scoring average. I doubt Aldridge would be particularly concerned it, either.

Besides, a regression is almost assured. Here are the seven times a player has scored at least 80 points in the first two games of the playoffs. Notice how everyone’s scoring average tumbles? It’s just too difficult to maintain such production in the long run. 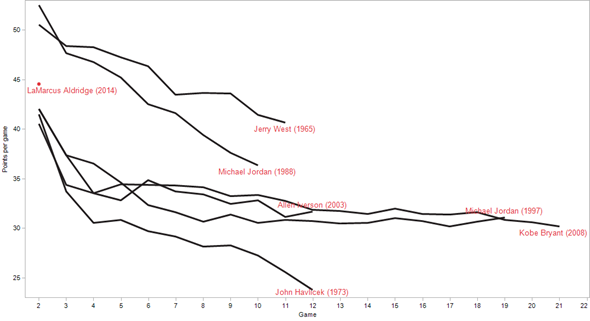 It’s for these reasons the all-time single-playoff scoring record is only barely within Aldridge’s reach despite him holding the mark currently. If he hangs on, there’s a solid chance something went wrong with Portland’s playoff run.

However, Aldridge is in much better shape to break the Trail Blazers record – 28.3 by Billy Ray Bates in a 1981 three-game sweep at the hands of the Kansas City Kings.

Here’s how many points per game Aldridge would need to average in Portland’s remaining playoff games, a number that ranges from four to 26, to tie the record: 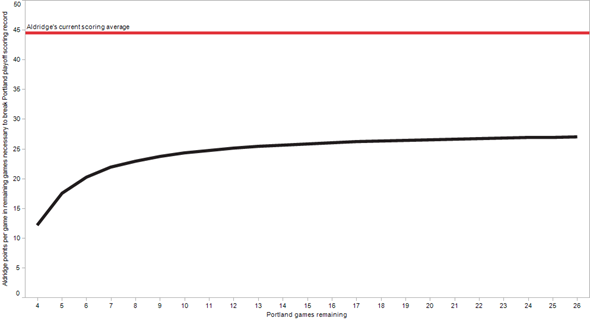 Claiming the NBA record would be a tremendous accomplishment, and it’s incredible Aldridge has even put himself in the discussion. He’s a very good player who has elevated his game when it matters most.

But breaking the Trail Blazers record and not the league record is much more likely with a long Portland playoff run, and isn’t that what matters most?