When Joakim Noah played, the Bulls defended like the NBA’s second-best team.

When Noah didn’t play… the Bulls defended like the NBA’s second-best team.

Noah, when accepting Defensive Player of the Year yesterday, was eager to share credit.

“This award is a team award,” Noah said, echoing many previous winners.

More than ever, it was true.

Since 2008 – as far back as NBA.com’s on/off data goes – no Defensive Player of the Year’s team allowed fewer points per possession without the winner on the court than the Bulls this season. Chicago’s defensive rating was a stout 98.0 with Noah on the bench (and 97.7 with him on the floor).

Here are the defensive ratings of the last seven Defensive Player of the Year’s teams with the winner on the court (red) and off the court (black): 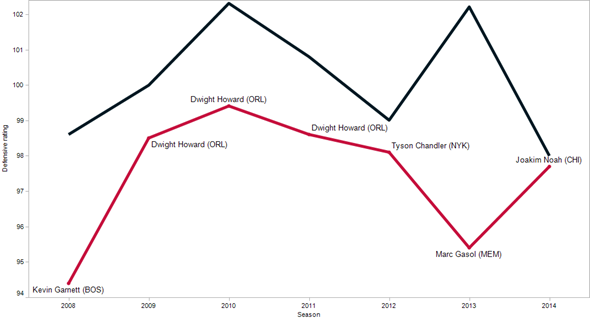 Unsurprisingly, each team defended better with its Defensive Player of the Year. But the Bulls’ defense held up impressively well without him.

And there’s nothing wrong with that. Noah shouldn’t be punished for playing for a good defensive coach and with good defensive teammates. He’s still worthy of the award.

But team success definitely factors into voting. Only one player outside a top-13 defensive team received votes (Anthony Davis on the 25th-ranked Pelicans), and only two top-10 teams had no players with votes (sixth-ranked Bobcats and ninth-ranked Raptors).

If Noah were the same defender but didn’t have a coach like Tom Thibodeau and teammates like Taj Gibson and Jimmy Butler, maybe the Bulls center wouldn’t have won the award. That’s not exactly fair, but as much as Noah deserves credit for an excellent defensive season, the Bulls deserve credit for positioning him to thrive.