To wit, here are effective field-goal percentages (which accounts for made 3-pointers being worth 50 percent more than made 2-pointers) of every NBA team for each of the five commonly used zones of the court: Restricted Area, In The Paint (Non-RA), Mid-Range, Corner 3 and Above the Break 3. 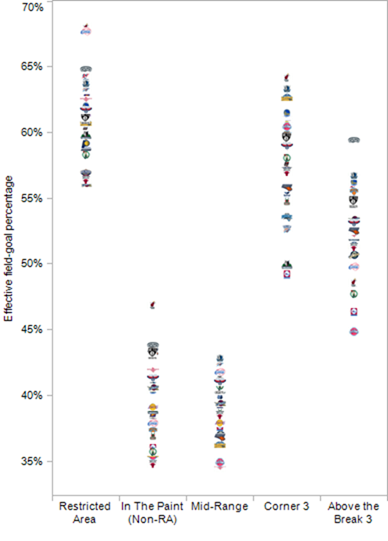 As you can see, teams are generally lumped by location on the floor.

Even the worst-finishing team in the Restricted Area (Cavaliers) shoots way better there than anyone does from In The Paint (Non-RA) or Mid-Range.

The worst team at Corner 3s (76ers) is also more effective from there than In The Paint (Non-RA) or Mid-Range, though the gap isn’t quite as wide.

Clearly, you don’t want to shoot from In The Paint (Non-RA) or Mid-Range. Even the best teams from those zones are inefficient relative to other areas on the court.