BOSTON – Al Jefferson, then a rookie with the Celtics, arrived to work the day after the 2005 regular season ended. Immediately, he realized the vibe had changed as Boston prepared for its first-round playoff series.

Two days later, he found out. Jefferson shot 3-for-3 in Game 1 against the Pacers, but he also learned a valuable lesson about postseason basketball.

“If you make a mistake, it was going to come back to get you,” Jefferson said.

Jefferson hasn’t won a playoff game since that series, getting swept with the Jazz in 2012. He spent the rest of his formative NBA years playing for some truly lousy teams.

It’s an experience the Charlotte Bobcats, Jefferson’s current team, don’t want for their developing players. After all, that’s why they signed Jefferson last summer – to ensure their young players get more-meaningful minutes rather than just more minutes.

At the time, the plan was viewed by many, myself included, as foolish. I believed Jefferson wasn’t good enough to lift Charlotte into the playoffs, but boy, was I wrong. Now that the Jefferson-led Bobcats are in the postseason (facing the Heat in the first round), the question becomes: Will his addition, and the winning it produced, help Charlotte’s young players?

“If you want to get into player development, you could argue all day,” Bobcats coach Steve Clifford said. “I think that one of the best things for young players is that they play in a role that they can play well in.”

For Clifford, the rationale is twofold.

1. Players learn best when they’re not overextended. “I’m a big believer that they should get what they’re ready for,” he said. “That teaches them how they have to play.” On bad teams, though, at least some players must take roles larger than they’re qualified for. If everyone could fill a role they were ready for, it’d be a good team.

These four, based on how Jefferson affects them, will dictate Charlotte’s future.

Walker, who leads the team with 35.8 minutes per game, is the only one with a huge role already. He’s also the most-advanced and nearest his peak. Walker’s role is not over his head by any means.

The third-year point guard will likely still grow, but it’s difficult to see areas on his game primed for major positive overhaul. Walker entered the NBA relatively polished after three years at UConn, and his between-season growth has shrunk rapidly.  At this point, it’s about fine-tuning – setting up more easy shots for his teammates while still avoiding turnovers, stealing more balls while still playing sound positional defense.

If he tops out as a quality starting point guard, a tier he might have already reached, that would be a praiseworthy accomplishment. But at just 23, Walker probably has not quite plateaued

Biyombo, who’s especially raw given his lack of high-level basketball experience prior to entering the NBA, is much harder to gauge.

Among the 109 players who defend at least four shots at the rim per game, nobody – not even Roy Hibbert – holds opponents to a lower field-goal percentage on those shots than Biyombo (39.1). Here are the top 25: 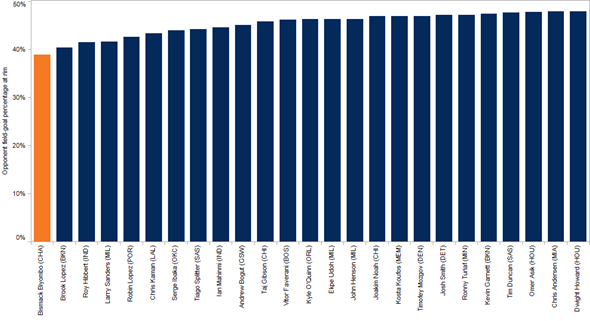 Biyombo is also finishing around the rim at a solid rate, a worrying spot last season.

When he plays, I see breakout potential, but it’s concerning his role has trended the wrong direction – all the way to the back of Clifford’s rotation. Eventually, Biyombo must parlay his inspiring flashes into his coach’s trust.

Also concerning, Biyombo and Jefferson don’t complement each other. As long as Jefferson keeps producing at All-NBA third team levels, Biyombo will have to prove himself in limited minutes. If he does, maybe he’d help the Bobcats most as a trade piece.

When Charlotte drafted Kidd-Gilchrist, I called him the perfect pick because he’s particularly well-suited to bring out the best in other good players. At the time, Charlotte lacked those, meaning Kidd-Gilchrist wouldn’t prevent the Bobcats from getting a much-needed high pick the next year.

Considering the Bobcats had the NBA’s second-worst record last season, that part of the plan worked.

Kidd-Gilchrist’s defensive development has similarly followed the desired progression. He’s both versatile and effective in the many responsibilities he takes.

Just look at the Bobcats’ roster and defensive ranking (sixth). Clifford has done a marvelous job, but Kidd-Gilchrist is the defensive centerpiece the coach has relied upon.

The success just hasn’t extended to the other end of the floor.

Kidd-Gilchrist’s shooting stroke has always been problematic, but now he’s just stopped trying. The only players who play as often as Kidd-Gilchrist and shoot less frequently outside the restricted areas are centers. 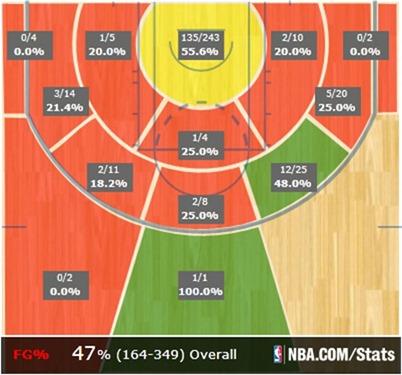 As a result, Kidd-Gilchrist sits during crunch time, freeing the Bobcats’ ball movement. When opponents are forced to guard all five players on the floor – something they often don’t do when Kidd-Gilchrist plays – Charlotte has shown a proclivity for making the extra pass(es).

For Kidd-Gilchrist, who plays just 24.2 minutes per game, there’s no question his evolution requires better shooting. He needn’t be a great jump shooter, but if he can even join the lowest end of his fellow small forwards, that would allow him more playing time – meaning more minutes Charlotte gets its best defender on the floor.

In the meantime, as the Bobcats designed, Kidd-Gilchrist will get valuable growing experience in the playoffs. He’ll become the first top-two pick to make the playoffs within two years of being drafted since Derrick Rose, who was picked No. 1 in 2008.

Like Kidd-Gilchrist, Zeller is getting an uncommon learning opportunity. Not many top-four picks reach the playoffs as rookies. (Washington’s No. 3 pick Otto Porter, in a much lesser role, will also do it this year.)

Even before the postseason, Zeller showed how a young player can develop as games become more meaningful.

Zeller admitted, because he had no reference point, he didn’t realize before the year the Bobcats would make the playoffs. But as that goal became more and more evidently attainable, Zeller has steadily improved, especially as a shooter. 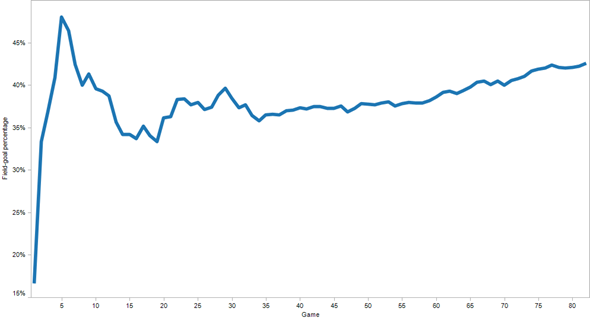 As he’s established himself as a reliable shot-maker, the Bobcats can use him without their offense crumbling

Clifford said he’s seen Zeller’s defense improve too, but the rookie’s progress on that end is not as evident. Zeller is still prone to getting caught flat-footed and not providing enough physical resistance. There’s unquestionably significant room to grow.

All in all, Zeller doesn’t mind his limited role – for now.

“You always want to make a bigger impact,” Zeller said. “But as a rookie, playing 18 to 20 minutes on a playoff team is a good role for me. I’m going to play the 18 to 20 minutes to the best of my ability, and if more comes, then more comes. But I’m not too worried about it.”

Zeller knows he’s still learning, and he lists Jefferson first among the veterans who’ve helped him.

Jefferson is seizing that leadership opportunity – imparting wisdom to Walker, Biyombo, Kidd-Gilchrist and Zeller as the Bobcats prepare to enter the postseason.

“I hope to show them that, if we believe in ourselves and play together and work together and commit coach’s system, this could the first of many playoff appearances,” Jefferson said, pausing slightly, then adding five words that will determine just how well Charlotte’s experiment will go. “And advancing in the playoffs.”