Kyrie Irving reportedly told people he wants to leave Cleveland. Heck, another report alleges he’s been saying so for years.

Irving has maintained he enjoys playing for the Cavaliers, and soon, he’ll have a chance to prove it.

Between July 10 and Oct. 31, Irving can sign a contract extension for up to five years. Considering he’s by far the best thing the Cavaliers have going for them, I’d be shocked if they don’t offer a max contract.

What would Irving think of that?

Irving, via Bob Finnan of The News-Herald & The Morning Journal:

“Obviously, I’m aware I can be extended this summer,” he said after the Cavs’ 114-85 victory over the Brooklyn Nets on April 16 before 19,842 at Quicken Loans Arena.

“It’s a big deal for me if they do offer me that. It will be exciting. I’ll make the best decision for me and my family. That’s what it will boil down to.”

Actually signing the extension is another. 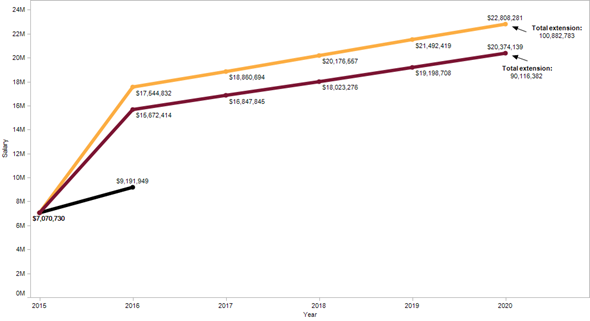 He’ll have to make that assessment this summer, and then, we’ll learned just how “excited” he’d be by an extension offer from the Cavaliers.