With their 117-105 win over the Nuggets last night, the Clippers won their 57th game of the season – clinching a franchise record for winning percentage. It’s a standard the Clippers have broken each of the last three years:

That had me wonder: How many years feature three of the best records in a franchise’s history? 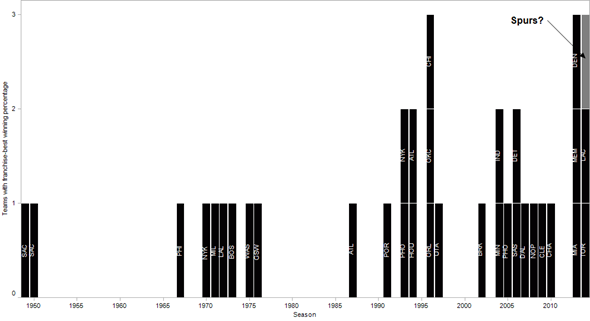 Last season, the Nuggets, Grizzlies and Heat had their best records ever. In 1995-96, the Bulls, Magic and Thunder (as the Seattle SuperSonics) saw their franchise highs.

Of course, more teams play now than ever. Before 1995-96, the Raptors never even had a chance to set their franchise high. That’s why the results are geared toward 2004-05 and beyond, since the Bobcats have given the NBA 30 teams.

But I enjoy watching a team – and its fanbase – as it pursues new heights. Toronto has rallied around these Raptors, and the Clippers bandwagon is sure filling up. It doesn’t matter to me whether the number of times it happens league-wide is influenced heavily by expansion.