When the Nets finally make their long-anticipated move to Brooklyn, New York, at least part of their name is guaranteed to change. New Jersey will be stricken from the franchise’s moniker for good, but along with that adjustment is a possible alteration of the team’s surname. ‘Brooklyn Nets’ seems catchy enough, but the temptation to re-brand (particularly given the Nets’ woes over the last season and change) may be too strong for Mikhail Prokhorov to pass up.

The possibilities could be endless. With an open book of naming potential, the New Brooklyn Net-Blanks would surely choose something interesting and original, right? Right?!

Sadly, that may (keyword: may) not be the case. According to Nets Daily, a Philadelphia law firm filed a full patent treatment for what seems to be a prospective basketball team in Brooklyn. Possible logos, jersey designs, and merchandise were included among the patent applications, and there’s no mistaking the fact that they were designed with a basketball team in mind. The name gracing the application? The Brooklyn New Yorkers.

A truly inspired choice. And, as the kicker, an…interesting potential logo: 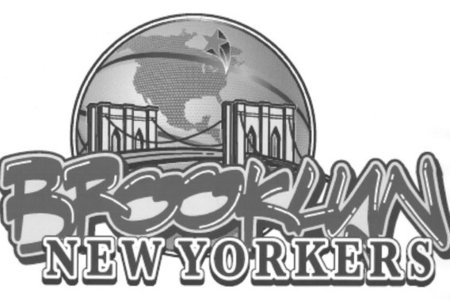 However, this is far from official, and still a bit removed from even being a legitimate rumor. Although someone is trying to lay claim to all things Brooklyn New Yorkers, there’s no specific reason to believe that it’s the Nets, aside from the fact that the team aims to be in Brooklyn and play basketball. There are still a number of alternative possibilities, and hopefully one of them nips this story in the bud. This team name and design seems far more fitting for a Harlem Globetrotter opponent than an NBA franchise. Then again, maybe this concept falls short of even that diminutive standard.